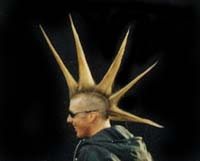 The next blog I read frequently is from Chuckie V.

I met Chuckie a long time ago at a race. During the late 80's and early 90's he was wildley famous for that Hair Cut. He was used in Gatoraide ads and tracended magazines outside of the world of Triathlon. That was the comercial side of Chuck. The real side was much different than the comercial side. For instance, to make it as a pro triathlete (not the highest paying job back then) Chuckie lived in his car. A Datsun 200sx I believe. Crazy as that sounds it worked for him. He was a darn good athlete winning a number of races including Ironman Canada. He also moved on to Bike racing and ended up racing here in Europe (Again, not the easiest of tasks especially for an American). After retirement, he dissapeared for a time. That time included not one but two hikes of the Pacific Crest Trail. You know, the trail that goes from Mexico to Canada through California, Oregon and Washington. 2,000 plus miles of hiking.
He has since taken up coaching for a living. Like Lucho it's not about how much money he makes it's about the quality of the job and the people he helps. What's best about Chuckie is that he is absolutely entertaining. He shares his views on just about everything, never really takes himself too seriously and you can tell that life around Chuckie is one laugh after another. At the same time, he's a good teacher of life. His posts really make you think about simplificiation. They are really good lessons.