I think anytime there is a change in life, things need to change. With the passing of my father I've been thinking a great deal about my life. I'm not fully ready to leap into change but there are some things to consider.
1. I love my wife and now she's the one when there were two.
2. My own business
3. I'm beginning again to hate meat.
4. I'm questioning my faith. What exactly does it mean? Who is the best person to turn too? Please don't give me the obvious answer.
5. I've created a list of the most influential loving people in my life. If you are on that list you will know it just by my contact with you.
6. I watched my father for 45 years, work with other people. I watched his relationship with his wife of 25 years. I want that!
7. I have got to find a way to sleep. Since his passing I don't sleep. I think has something to do with the challenges above.
8. I want to run like Marco. I'm know he doesn't see it and maybe he won't ever care enough to put it all together (I would like to see him do it but I really only want him happy) but to watch him run is absolute beauty. The only way I can describe it is float. While other kids grind he just floats. I want to float.
It's a good life....
Dave
Posted by David Jewell at 4:56 AM No comments: 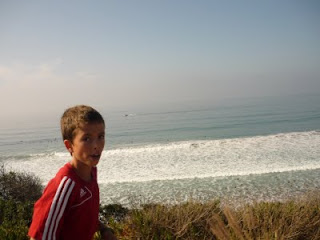 http://ironman.com/columns/gruenfeld/lee-gruenfeld-recaps-rudy-garcia-tolsons-amazing-ironman
Posted by David Jewell at 12:39 PM No comments:

I love you Dad. You will always be a part of my life. The following was the message I delivered at the service for my Dad. I'm sure I'm going to talk more in the future.

Growing up Dad taught me how to shake hands with people. By the time I was 12 I think I shook more hands than most people will shake in a lifetime. I’m sure for the first 1000 or 2000 times I was the kid who put my head down in embarrassment and shook the hand. In time though through an unending stream of people I learned to look a person in the eye when I shook their hand. I didn’t understand at age 12 what that meant. I’m not really sure when it hit me but I know now that everyone in this room other than a few family members started their relationship with my Dad with a simple hand shake. There wasn’t anything simple about that handshake though. When you first met him maybe you didn’t even realize it. That Hand Shake meant the world to him. It was his word to do his best for you. It was everything to him.

In the late 60’s Dad and the family were sent by Caterpillar Tractor Company to Brasil. They asked him to build the distribution of CAT products in Latin America. So he got in his VW Bug and started driving. Stopping to shake hands and build relationships at every Cat Dealer in Brasil, Argentina, Venezuela and more. He didn’t speak their language yet, and didn’t really know their business yet but he new he could give them his best. I’m proud to say when you travel through Latin America today and look at Construction sights you see CAT Tractors.

When my wife Mary was a fairly new teacher in the Barrio of San Diego, she asked Dad to come talk to her class. He brought his clubs and all his swing perfection gadgets, his handshake and got these kids moving. He had Miss Jewell doing the Hoola Hoop thing in front her 8th graders. That was the clincher on the relationship with them. His message was simple, find something you really have a passion for and then give it your best. Good things will come. For months after that session the kids were regularly asking when Mr. Jewell was coming back.

As most of you know we spent a couple years in Germany. Dad came to visit about a year after we moved there. This was pre joint replacement surgery. Tired, stiff and obviously jet lagged he new our son Marco was super excited to share his new language. For 6 hours they sat on the floor and played Monopoly in German. This morning Marco told me that Papi taught him how to shake hands.

25+ years ago my Dad asked me to shake the hand of Cathy Mundy. I’m sure their relationship started with a handshake. That one handshake changed the lives of so many. Virtually everyone in this room is a product of that bond. 6 marriages still going strong. 12 grand children who have a unique relationship with Ani and Papi. I know for sure as I that my life, and my relationship with my Dad grew to what it is today because of that one hand shake.

Running – The stories of running in this book are priceless. The feeling that is running is one that you can’t match in anything. It is pure, it never disappoints and it will make your day better even if you thought you were in a good way to begin with. The story of the two young runners without a care in the world getting lost struck home. I remember fondly a run in the Rocky Mountains that was scheduled to be 90 minutes and ended up 3.5 hours. I had no water, no food, no ID and no idea where I was. Mary was not too happy with that run. Ever since I have to give fairly detailed descriptions of where I’m going. We never did find out if anything happened to those two young runners. They drank out of a mud puddle in Mexico. Did they ever get sick?

I will point out that the studies on running shoes reflected in this book were done in the 80’s. One such study said that you are twice as likely to be injured in a shoe over $95 than you are in a shoe under $40. That study was completed in 1989. Prior to 1989 there were very few shoes over the price of $95. In fact there were probably a total of 5 or 6 total. Asics, Nike and New Balance each had one. Not too many others that’s for sure. The point is that study is not valid today. Not even remotely valid. Mr. McDougall would argue I believe that injuries haven’t changed in fact they’ve gotten worse. I would turn that around and say Mr. McDougall look around you. In 1989 there was no Team n Training. There was no Rock n Roll Marathon. Boston did not sell out. I argue that instead of looking at injuries, let’s look at runners. There are more runners today, crossing a finish line successfully than ever before. Let’s celebrate runners not bash Running shoe companies.

I’m also a believer that you don’t need all that stuff in your shoe. Let’s start with the shoe itself. Layer upon layer of stuff on your shoe doesn’t make it better. In fact unless it’s done completely correctly it probably means the shoe isn’t that good. Cut one of your old shoes up with a ban saw and look at what you’re paying for. If there are lots of layers in the foam or layers on the upper you probably paid for someone to put those layers there. Now lets look at what you put in your shoe. That insole you are buying to put in your shoe is creating more shoe. Remember you want the least possible so ask the person helping you, is this the least amount of shoe I can get away with.

Posted by David Jewell at 9:40 AM No comments:

Yesterday I was listening to sports radio. The topic was Football and speed. There was an interview with a San Diego Charger offensive lineman. The line has been playing better football recently and he was asked why. He said, "we've got a couple young guys on the line and it takes a long time to slow the game down" by this he mean's learn the job so well that the intense speed of the game is no longer a factor. At that point the difference is knowing your assignment on the play and executing it.
This made me think about our life right now. I'll speak for myself in saying that I haven't caught up to the speed yet. The speed that is the new job, the speed that is the new pace of life, the speed that is club cross country. It's not that I can't handle it. Just like the NFL linemen, I have all the tools to do it but I'm just not there yet.
Job - It's interesting that I find myself back at the start. When I joined Road Runner Sports is was going backwards. There is just no other way to put it. After years of doubling the business the business hit a snag and was going south. The business was fast and diverse but not really going anywhere. It took 1.5 years to slow it down and then bam the business absolutely took off. It wasn't just my doing, there were 6-8 of us that joined at the same time and grew on the same curve. Now at Zoot I find myself doing the same things. The business is not shrinking it's just new. Much of the things that need to be done are the same as my early days at RRS. I don't think we have 1.5 years to do slow the speed down. Luckily I have a bigger tool box this time around.
Life - When we moved to Germany it was a good 6 months before we matched the speed of life. Everything was different and we weren't up to it at the start. The interesting part about that was that we moved at different times and therefore had to go through it twice. I had to get used to Germany and then I had get used to the speed of Germany with Mary and Marco. Now we move back to California and it's like that underlying pressure to be at speed right now. Why wouldn't we, we lived it before. Not so fast though. We were living at Germany speed. Now only 3 months back in California and we're running into the speed trap. Throw into the trap a fairly intense cross country season and we've totally blown the speed barrier. I give us another 3 months before we slow this life down. Again that does not mean it actually slows down. Just that we get to turn our focus to using the tools we have at executing rather than what I know I'm doing now, chasing the speed.
It's a good life....
Dave
Posted by David Jewell at 1:52 PM No comments: