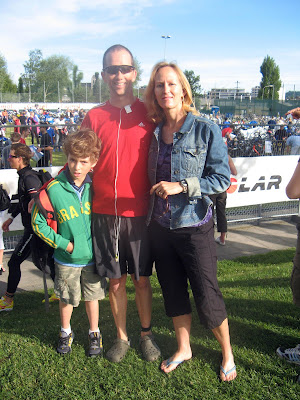 A note on Switzerland
What an amazing country. It's not the first time we've been there but it is the first time we stayed. Switzerland is to mountains what Hawaii is to Islands. It just seems to be at the exact right place on earth to be perfect. The mountains are tall and stunning with jagged peaks and lots of snow. The lakes are crystal clear. The hills are just as green as they can be. The people are warm and inviting. If you ever get a chance visit. We were in Jappersville Jona which is on the south end of Lake Zurich. We stayed in a small hotel on the side of a mountain. The road down was 1.5 lanes of twisting turning fun.
The Race
As reported earlier this was the first race for me in almost 18 months. I didn't really know what to expect. My last race of this distance (1.9K 90K 21.1K) was in May 2006 at the Baja 70.3. So roughly 2 years, 12 more pounds and yes it counts 2 years in age. To say the least on Saturday I was a nervous reck. A triathlon is not a show up and race kind of event. You have to be prepared the day before. So most of Saturday was spent picking up the packet turning in the bike and just trying not to get on the nerves of my great family. Mentally I waffled from just finishing the thing to racing until I dropped. A glass of wine on the veranda of our hotel overlooking the entire valley below was a good way to settle down.
A great nights sleep and I was ready to go. My goal was set: Do the race as hard as you can, pain free. The start was a little odd for me at 9:45am. In Cali my agegroup might be 8:00am but never 9:45. It's Europe and they apparently have friends in city governments who are willing to close roads for long periods of time. Anyway it was 9:30 when I entered the water finally for a little warm up and the start.
Swim
What can I say, if there is one area of "training" I have slacked on this year it is swimming. Finding time and an open lane has not been the easiest. I started the swim easy and kept it easy. My goal here be absolutely comfortable. I found some feet to draft off and just sat in. My swim time was 35:10. If I swim hard all year and do this race I might swim 29 so I wasn't dissapointed.
Bike
No preview but I didn't need one. It's Switzerland afterall, there will be hills. The bike was two 45K loops. The first 10K and the last 10K of each loop was relatively flat. Put the head down and go was the call here and for the most part that's what I did. Pegged at 90 RPM's. At the 10K point a left turn started the grind. Over the next 10K there were three big climbs. Each had sections in the 15 - 18% range. In other words they were steep. One of the hills just kept climbing. At roughly the 20K point the road pointed down for long sweeping turns. This lasted for most of 10K and then boom straight down 15% grade of switchbacks. Finally back to the flats for the trip back. Then do it again. So I managed the flats strong. I climbed o.k. but could use some more work and I stayed upright on the downhills.
Time: 2:45
Run
The run is where the hurting usually happens. I settled into a pace that was comfortable and motor like. Again my goal was finish pain free. There were times where I held back and there were times I felt good but did not feel I could step up the pace. I just kept the motor going. The run was a great mixture of heat, shade, soft dirt and cobbles in town. Exatcly what I expected in Europe. The only time I really picked it up was in the last 3K. I crossed the line with pleanty left in the tank, no blisters and no crazy I'm going to drop fatigue.
Run time: 1:39:51
Total Time: 5:03:33
It wasn't my goal but I still had to look. I placed 48th in my age group and 315th overall. In my young head those are weak results for me, I'm much more competitve than that. But in my wisdom head, this is a good result. I didn't hurt, my feet feel good and compared to Baja 2006 I'm 9 minutes and 12 seconds faster.
There will be a time and a place to lay it on the line and hurt again. I'll find it somewhere.
Many thanks go to Mary and Marco Jewell for putting up with me all the time. Also many thanks to the Multisports School of Champions. They provide the coaching and without them it wouldn't happen.
It's a good life.....
Dave
Posted by David Jewell at 10:56 AM

congrats dave, and we miss you here
in SD
-mike the shoe