Running Around: I'll Take the Stairs 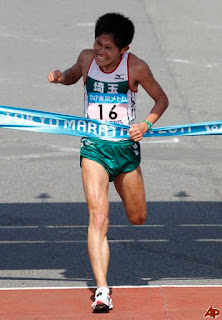 You may not know Yuki Kawauchi but after you read his story you'll appreciate the man he is. He wasn't a star runner in high school, he didn't go to college to run. He's not on an elite running team in Japan where you are taken care of. He's a working class runner who simply worked so hard and gave it all at the finish. Read his story here.

Yuki is quoted as saying: "I am willing to die when I am running" That's not something you hear too often. In fact probably not ever. Last year he crossed the line at the Tokyo marathon 3rd overall and collapsed. This year (last weekend in Tokyo) he trained harder and put great expectations upon himself. He ran to total exhaustion and collapsed again. This time though he was 14th. On Monday the day after the race he was back at work. He shaved his head to show people that he let them down.  He felt bad because people were counting on him and he didn't pull through. His 14th place put his hopeful Olympic team bid in Jeopardy.

The point of this is when you visit Japan you see a head down work ethic beyond belief. You are welcomed by an extremely humble culture. It's a place where a guy like Yuki could actually pull it off becoming a national hero. I was just happy to run on the same roads Yuki ran on.

Email ThisBlogThis!Share to TwitterShare to FacebookShare to Pinterest
Labels: Running