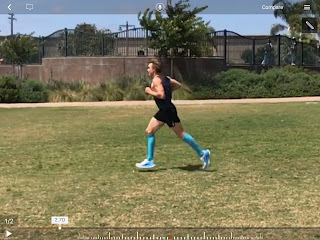 This guy in the picture picked up triathlon roughly a year ago. He did his first races this year and qualified for the 70.3 Worlds next year. His running form is nothing to love but his determination is. He’s running under 1:30 off the bike for 13.1 miles. That’s darn good!

This brings us to the World Record set Saturday in Copenhagen. 58:01!!!!!!!!! Geoffrey Kamworor ran 13.1 miles or 21K kind of really fast. Simply amazing. Soon Kipchoge will attempt to run under 2 hours for the marathon. As soon as he does this, watch how many others do it.

Primoz Roglic won the Vuelta Espana. He did it in methodical convincing fashion. He took the lead and the simply defended his lead convincingly. All the others were simply racing for the podium. On Saturday in miserable conditions his Slovenian countryman crushed the field in the mountains to win and secure 3rd place overall. What’s amazing is Tadej Pogocar  20 years old. That’s one year younger than my son. He’s got a huge career ahead of him.

Listening - I’ll start with the Science of Sport Podcast - Last week they did a podcast on all of the ways athletes cheat to win. It was a fascinating listen but what made me laugh in jest was the listing they gave. 7 things you must do if you want to cheat successfully.

In sport we don’t have to look too far to see all seven. Go back to the days of Lance and these are the tactics he used. Now get out of sport and look at the current President of the USA. I’ll let you draw your own opinion.

The Morning Shake Out was a really serious discussion on eating disorders and other disorders. The two guests, bad ass Spartan Racer, Amelia Boone revealed earlier this summer that she’s been dealing with an eating disorder since she was in high school. Brad Stulberg who has written some really good books and writes for Outside Magazine divulged his own obsessive compulsive problems.

It really made me think closely about my own compulsive nature. When I did my first Ironman in Kona I worked my rear end off, literally. I was the same height I am now 5’10’’ but I was 129lbs. If you go back a few posts I was 160lbs in June of this year. There were days in the past where that 129lb body was something I really wanted. It’s when I was really fast especially running. I change my “diet” often but more than anything I under ate. Sure I was training heavily but I got really tired eating so I simply didn’t. I know for certain I still lean that way. What I’ve done to help myself out is created an account with My Fitness Pal. I log my food intake on a regular basis and my Strava account is linked to it. I do this to monitor my calorie intake and my macro nutrients. I wish these apps were available 15 years ago.