Hiking in Place of Running 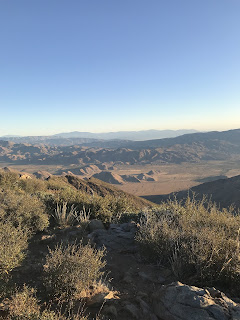 On December 1st this year I’m signed up for an end of the year 50K trail race. On Friday I did one of my key workouts leading up to the race. I’m not “training” for the 50K I am simply preparing my body to have a good day. So, Friday a friend and I drove out to our local mountains and did a 5 hour hike on the Pacific Crest Trail. It was all done between 4,500 and 5,000 feet of elevation. The goal was simply to put time on the feet. We were home by 12:30 in the afternoon and in general I felt really good. Nothing was aching, I wasn’t starving and I think I did the hydration correctly.

On Sunday we ran on our local trails. The goal was to find as many hills as we could to run up and down. My biggest issue in the 50K will be the down hills. They will beat me up. Right now I’m working on building some resilience in my legs by running down hill. Our run covered 9 miles and we climbed and descended 1,l00 feet on really soft wood chip trails. We had 3 climbs just over 10 minutes in length and a bunch of shorter ones. The run felt outstanding and gave me really good confidence from the hike on Friday. 90 minutes of running doesn’t seem too long after 5 hours on the feet two days before.

The hype leading in the the Ironman World Championships is growing. Probably the biggest event leading into this year happened on Saturday. Cam Wurf destroyed the field at Ironman Italy. The most glaring figure is his 2:45 marathon. His task is quite simple in Kona. Swim well, ride to the front by Hawi and then ride away on the way back. . Finally he needs to run strong from the start. He doesn’t have to run 2:45 but it wouldn’t hurt to run 2:45 for a really long time putting pressure on every body behind him. One thing for sure the conditions won’t be overcast,windless and cool like last year. The windier it is the more it favors the really strong cyclists which should be good for Cam.