Nike Vapor Fly 4% Flyknit and Next % 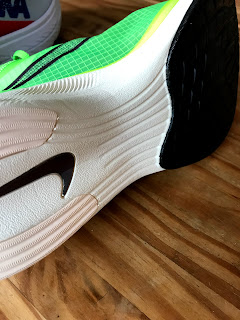 Keneisa Bekele is the most dominant runner we have ever seen. 11 times he won the World Cross Country Championship. He still holds the World Record for the 50000 and 10000 on the track. The one place where he struggled if you can call it that is the marathon. He had run very fast and won a few races but he ran into the greatest marathoner we’ve ever seen in Kipchoge and it affected his running. He changed all of that in one race on Sunday. Nobody expected a world record type day. Kipchoge wasn’t racing and nobody in the field was close to 2:02 on paper. The opening stages of the marathon proved that out. At 25K into the race Bekele and Berhanu Legese were on 2:02 pace not world record pace. Things changed from there. Legese ran 14:09 between 30 and 35K putting a gap on Bekele. Bekele ran 14:20 for that same 5K which was his fastest of the race but put him behind. Bekele wasn’t done, he ran 14:15 from 35 to 40k passing Legese and all of the sudden he was on world record pace. It was a beautiful thing to watch, 2:01:41! Two seconds off the World Record. Watch it below.

The women’s race was something special too! It came down to a sprint through the Brandenburg Gate but the camera work was terrible. Ashete Bekere won in 2:20:14, Mare Dibaba was second in 2:20:21.

As I said, the cycling world championships were simply fun to watch. Team USA shined the entire week. You can read all about them at www.velonews.com. The conditions on Sunday for the professional men were down right extreme. Cold rain might be the worst conditions to ride a bike in. By the end of the race there were only 20 or so who actually finished. If you aren't going to win and you don't have a teammate who might win there is no point suffering in those conditions.

My Weekend
I raced twice this weekend.

Race #1 - Crazy 8's 5K
The race was held in the park where a young runner named Chelsea King was abducted, raped and killed. A week or 2 after that happened 3,000 people showed up to finish Chelsea's run. It had been almost 10 years since that day and almost 10 years since I had been back in that park. I had to catch my breath as I started my warm up.
This was the 3rd cross country race for me this year. The first 2 were solid but I was finishing behind people I thought I should be able to beat. Saturday the race came together well for me and I finished ahead of everyone I thought I should. I wore the Reebok Float Ride Fast a shoe built with a Pbax midsole with a really good outsole on grass and hard pack sand. The shoes worked great.

Race #2 - Mission Bay Triathlon
My first and only triathlon for the year. I chose the sprint distance which was a 500m swim, 17K bike and 5K run. The swim felt comfortable. I swam hard and my swim fitness responded. Coming out of the water I realized I had forgotten how tough that parking lot is. My feet were not liking the surface. The race is such that you have to leave transition in the morning by 6:30. My race didn't start until 8:10. I run up to my bike surprised that someone has set their bike on top of all my stuff and set up his towel and shoes in front of his bike and mine. I got my wetsuit off easy put my helmet on and started wheeling my bike out. Oops, forgot my shoes were not attached to the pedals. Back to the rack put shoes on then wheeled my bike out. It took me about a minute to catch my breath on the bike but then I found a rhythm. I passed some guys in my age group and some guys passed me. The bike was over before I knew it. Off the bike barefoot my feet were still hurting from the first transition. They liked the second even worse. Get to my running shoes and the guy has thrown his wetsuit over my shoes. Whatever, I struggle to put my shoes on but finally get them on. The run is on concreate the entire way. I thought after my hard race the day before this one would hurt. It didn't, in fact it felt great. I was flying and passing lot's of athletes. I think I passed 4 in my age group. I finished 40th overall and 4th in my age group. A good solid hour of racing. The reason why my legs didn't hurt is the Nike Vapor Fly 4%. It has the same midsole material as the Reebok with the carbon plate in the forefoot added in. It's the shoe that Bekele used in Berlin. I felt at the finish that I could keep going at the same pace I was running. It's not that I didn't push hard enough because I was pushing the run hard. It's simply that my legs didn't hurt.

I knew that about the Nike shoes. Most runners say this about the shoe "I don't know if I am running faster in the shoes but I know I'm not beat up like I would be". I had done one run in the Vapor Fly's. I didn't feel it then buy I do today. My legs do not hurt!
Posted by David Jewell at 10:04 AM