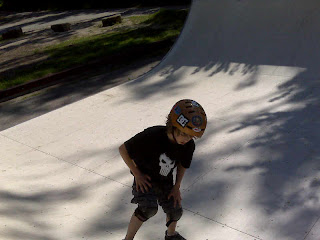 With the warmer weather Marco has become a skater again. He started in the streets outside our house but grew tired and asked to go the local skate park. The picture above is him practicing his craft on a 8 foot vert ramp. He really enjoys learning new tricks and has accepted the fact that falling is part of skating. He had a couple good falls of f the coping at the top of the ramp. He got right back up there and tried his tricks again.

It has been a sad week around the house. Losing a 14 year friend is not an easy thing. The entire family is in a bit of a daze this week. For the most part everything is going well but then all of a sudden we are reminded by our loss and it hurts. Just watching Scout try to figure out life without her leader is sad. At times she looks lost. She seems to keep looking for him behind every door. Along with that loneliness, poor Scout cut one of the pads on her paw and has been sidelined from long walks or runs.

The outpooring of well wishes from around the world have been great. Everyone that knows us knows how much we love our dogs and it shows. At Friday sharing, Marco shared some pictures of Neptune when he was a puppy along with his collar and the clip of hair Marco saved. All the kids came up to Mary at pick up and told her how sorry they were about the dog.

Along with everything, Mary reminded me of a golden rule. Keep your eye on the end goal. Milestones are great but if they hamper success of the end goal they are misstakes. Last weekend Mary had a milestone to run 2 hours. Her short term goal is the Brussels 20K next weekend and her long term goal is the Berlin Marathon in the Fall. Her back was hurting before the run but she pushed on thinking "I've got to do this run". She finished the run but in a great deal of pain. She has been dealing with that pain all week and has not run. Her back is getting better and will be fine for the 20K but she won't be as strong as she could be for that event. The mind plays tricks on you and makes you think you will not have success of you don't hit that Milestone. In fact Mary would be so much better off if she would have bagged the 2 hour run and waited the day or so for her back to get better. Yes, she would have missed a base building long run, but it's not the goal, the 20K and Berlin are. There is no need to compromize those goals just to hit the milestone.

To make matters worse, she's my wife. She should know better and I should have stood at the door blocking her run. Neither happened and now she's worried about the 20K goal.