Running Form in the Olympics

If you didn't watch the Olympic Marathon yesterday what's wrong with you. The winner Stephen Kiprotich crushed yesterday. In the field were the fastest Marathoners of 2011 from Kenya and Ethiopia and a little known man from Uganda took the title. He did it with one of the boldest moves in Marathoning. At the 23 mile mark on a slight incline he let fly and his Kenyan running partners could not match the pace. It was beautiful. Also in the race Meb Keflezghi proved that he's the best marathoner in the USA. He's not the fastest but speed doesn't count without results and Meb has the results. Silver Medal Olympic Marathon '04, NYC Marathon Champion '08, Olympic Marathon Trials Champion 2012, 4th Place Olympic Marathon 2012.

Now to the topic at hand. Stephen Kiprotich proved that running foot form mean's nothing. Upper body form and strength mean everything. 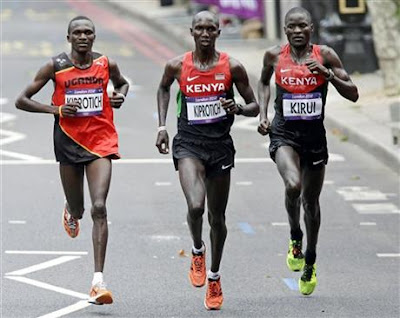 In this picture you can see that the right foot on Stephen (guy on the left) is kicking out before it lands. The only thing a foot will do when this happens is it will Over-Pronate. Over-Pronate as in be really slow on the ground and cause all kinds of problems from the ankle up. The other two runners are perfect if you look at their feet. Just looking at feet there is no way Stephen should win. 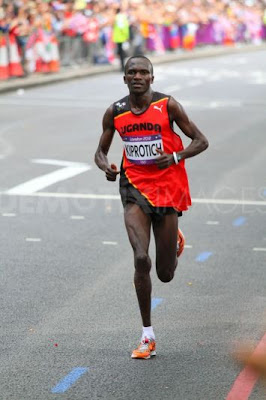 Yet win he did, and by a wide margin. It just proves that your foot does what your foot does. It lands midfoot or on the heel it stays strong or it rolls in. What matters is how you carry your upper body and your overall cadence. That and some strong legs and core. Stephen and the other two runners had perfect form. They ran upright, used their arms and had a very high turnover. All the energy was directed forward and very little was wasted.

Hello David,
Just a quick message to ask if you would be interested in a 'mutual' following on twitter. I am currently following you now and am awaiting for your follow-back. (#FYI I do RT's for all #Triathletes #Cyclists #UltraRunners & #Marathoners who follow me on Twitter and have something important they want mentioned...)

All the very best to you and yours for the rest of 2012 and beyond David. Look forward to hearing from you...