Shark Attack and a couple books

Dang, it's been a long time since I last posted. The trip to Panama, Mexico and Boston was good for business but way too long. I feel completely out of touch with Family, Germany and the world in general. So, this posting will be short.

Shark Attack
It's always scary to hear about a shark attack but it's 10 times worse when it's at a favorite swimming spot and it happened to a fellow triathlete. Now I don't know Dave Martin by name but I'm sure as soon as his picture is posted I'll know who he was. It's sad for his family and it's sad for the Tri Club of San Diego. That club has been hit by too much sadness over the last year. The loss of the club president and now this. From all the way over here in Germany the Jewell family is thinking of everyone in San Diego today.

Six Minutes to Freedom
I am probably way late on this book but my gosh, if you haven't read it, read it. This is the story of how Panama really got taken down by the US Special forces in the late 80's. It's not a war book though. It's about a guy who had a belief that his adopted country could be better. It's also a great Special Forces story but that comes late in the book.

The Day my Butt went Psycho
It's a book Marco read and I picked it up today. I've been laughing ever since. It's totally stupid but at the same time every guy should read this book and also let their 9 year old read it. The title is enough to let you know what this book is about. It's really well written, trust me.
Posted by David Jewell at 10:32 AM No comments:

This past week was a great week. My Dad, Papi flew to Germany to spend the week with us. He said he wanted to see how we lived in Germany. Dad, I hope we didn't bore you too much. This part of Germany is much like the midwest USA. You can cover it in a day.

Some things about my Dad - He has a unique way of calming me down. He also has a unique way of making me proud. I think I'm just a really lucky guy to have a Dad like mine. He's a great supporter and he's still the guy I go to for advice on everything. Although I didn't directly ask for it during this trip he gave me great advice without even knowing it. By just spending time with him and listening to his stories I continue to learn how to be a better husband and a better collegue at work. Most importantly to me above all else is that Marco adores him. There is Papi and then there is the rest of us in Marcos eyes. If Papi says so it must be true. The bond between the two of them is something special to watch. We are all lucky to watch it play out.

As soon as my Dad sends pictures of our week, I'll post some on the Blog.

The real hero of the week though was Mary. Now all of you know how I feel about Mary. Last week just shows you that I'm the luckiest guy on earth. Last week, Mary and Marco were on vacation so it was a good time for Papi to come visit. Mary played tour guide and really went out of her way to make my Dad feel at home. On Thursday they drove to Stutgart (2 hours away) so Papi could pick up the new Car. They toured the MB factory, had lunch and delivered the car to the shipper. Then they drove home. How many daughter in laws, or son in laws for that matter would do that. 4 hours of driving and an entire vacation day spent driving a non-blood relative to buy a car. I don't really know I just know that Mary did it and she desrves something for that trip alone. You can reach her at jewell492@aol.com if you would like to send her your hero worshiping emails or ask advice on how she does it.

Finally, I will be away from the Blog for a couple weeks. Work and Travel await!
Next week it Panama again!
Then it's 3 days in Mexico City to visit retail and Runners.
Final stop is Boston for the Annual Boston Marathon and all that goes along with it.
Home again on the 22nd of April

Dave
Posted by David Jewell at 11:27 AM No comments: 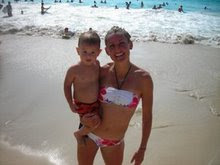