Can The Fitness Come Back in 8 Weeks? 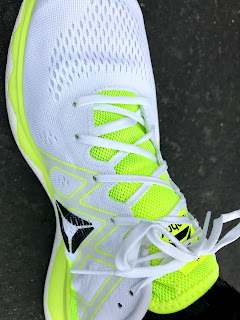 All year and for pretty much the last 5 years I’ve stayed fit. Not through any specific training but just general triathlon based fitness. Over the last two years although maintaining a regular workout schedule that averaged 9 hours of work each week my weight has slowly and steadily gone up. I could still run relatively quick, my swimming was strong but where I felt it the most was climbing on the bike. I just didn’t go up hill like I used to.

In February of this year a buddy and his wife came to stay with me for  a week. He’s a top armature in any sport involving a bike and she’s always on the edge of greatness. They schooled me in training for the week but what impressed me more was his commitment to everthing else, stretching and general fueling.

From that week on I did two things that have been simply better for me totally. First I started doing Yoga every day. 15 minutes. Second I began eating more food each day. Both did wonders for my overall feeling. I felt stronger and I had more energy throughout the day. Not long after that I started traveling around the world for work and did what I could during that time to stay fit and strong.

Starting about 8 weeks ago I had a break in the work schedule that allowed me to stay home. I decided to see if I could get into race shape in the 8 week period. I took a very dedicated approach and put some races in the schedule to make it legitimate. The general schedule looked like this:

Doing this heavy of a schedule I knew I needed to bring more carbohydrates into my meals. I did that in the morning and at lunch, leaving dinner to a smaller meal with quality meat and veggies. Also notice the amount of rest there is in the schedule. Sunday Off, Monday Easy, Thursday Easy.

My longest run during the 8 weeks was 2:20 but that was a mistake. I had a nasty bike crash on Wednesday did rehab Thursday, took it easy Friday than did a long trail run with a friend. You know how a run usually makes you feel better by the end? This run sucked from start and got worse.

My longest ride was 3.5 hours. All of my long rides were on the the mountain bike until it got way too hot to do that.

Also I added a wake up round of 15 military burpees each day.

A raced three times with the 4th one this Saturday. The first two were sprint triathlons. If felt good to race fast again. All of the work in the swim and on the bike paid off. I felt really strong on both. My run felt good but not great. I finished 5th in my age group in the first race and 2nd in my age group in the second race. The next race was a 5 K cross country race that was totally fun but I was not ultra fast.

Just before the cross country race I noticed that my weight hadn’t changed. I was the heaviest I had ever been when I started at 159lbs and I was still 159lbs. That simply didn’t seem right based on the work I was doing. I decided then to change my carbohydrate source. I went from whole grain toast or oatmeal to strictly rice. I also upped my protein intake from 2 eggs to 3 and threw in bacon for breakfast.

Over the last three weeks the weight has fallen off. I’m down to 152lbs which is still over my true top race form weight but oh does it feel better. My running has become lighter, my climbing on the bike has returned. It’s all started to feel good again. This Saturday is the the final of the 4 races.

Next week before I start a very busy travel schedule that has me crossing the country 3 times and the Pacific twice I’m going to do some testing. Once on the track for a lactate threshold run. Once on the trainer for the Sufferfest Test and then a 1000 for time in the pool. I have all of these numbers from previous tests and will be able to compare. I can’t wait to see the results.

Posted by David Jewell at 4:19 PM No comments: