Last weekend was the Ironman World Championships in Kailua-Kona, Hawaii. I was there to enjoy the energy of the event as well as do the running shoe count on race day.

For the stats on the shoe count go here: http://lavamagazine.com/asics-tops-the-2016-kona-shoe-count-results/

Some things you can learn from watching 2200 pairs of feet going by:
For the most part, people make good footwear decisions. Some don't. 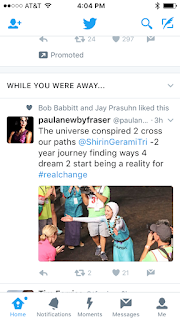 Kind of late in the day when the field was kind of thinned out, a motor cycle with a camera on the back was rolling down the road. You could see it for 1/4 mile and you knew this was an important athlete. I'm sure if you watch the Ironman coverage on NBC you'll see the woman as one of the focus stories of the race. She's the first observant Muslim woman to race in the Ironman World Championships. It was truly inspiring to watch her run in that heat fully covered.

The sad thing or more the sickening thing was what I heard as she ran by. My country is a divided country. The Isolationists have a voice and it was in full force at Mile 5 of the Ironman Marathon. A guy standing on his porch by himself says in a loud deep voice "I hope she's not carrying explosives in all those bottles" I am not kidding you. I wanted to punch him. He then repeated it to his neighbor who was walking his dog roughly 30 minutes later.

On a lighter note I ran into the woman who sent the tweet, Paula Newby-Fraser. She of the 8 Ironman Kona titles. Her first words to me "Jeweller, I heard about you not making it in the swim at SuperFrog. That's a black mark on you in San Diego" Never a break from Paula. It's why we love her.

A few weeks back my wife Mary asked me if I wanted to do the Boot Camp Challenge ant the Marine Corps Recruit Depot (MCRD) in San Diego. It's where our son started Boot Camp and where we will see him graduate in a little over a month. I said ok. I did so to support her more than anything.
We drove to the race separately because I had to leave quickly to go to work. The security at this base is high. They have a section where every car is searched and in this case they were searching 5 at a time. Mary and I were in the same 5 car section. You have to get out of your car and stand aside while they do the search. Mary came to me crying. The emotions of being on base were getting the best of her. It's understandable since it's through these gates that your son went and when we see him next he'll officially be a Marine instead of a Marine Recruit. We got there quite early and had time to take some pictures. 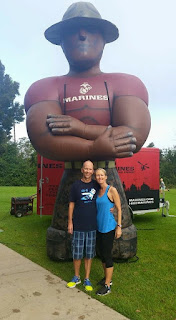 I made my way to my start group and made it about half way to the front. The guy next to me asks if this is my first time. He said "just put one foot in front of the other and you'll be fine". The horn went off and we were moving. Like any running start unless you are at the front it's a slow start. I started at a slow trot and let the people in front thin out a bit. Once I saw a gap I got into race mode. By the first section of obstacles at 1.5 miles I had made it close to the front of my group. The obsticals are simply a variation of going through the actual MCRD O course. Of course it's made easier for civilians. Like the Marines we had Drill Instructors at each obstical yelling at us. Most of the yelling came down to these words SPRINT, YOU ARE NOT GOING HARD ENOUGH, I NEED TO HEAR YES SIR. I got the hang of it quickly and actually tried to push hard through the obsticals. With the first section done there was a short reprieve before the second set. The entire O course started with 20 Marine push-ups and finished with 10 Marine push-ups. By the time I hit the 10 I was gassed. After that it was 1 mile to the finish. I got up and went as hard as possible. It felt like I was going hard but I sure wasn't going fast. With the finish line in sight I tried to sprint. It was a good effort. I hit the line in 23:43 and was slightly impressed. I knew the winner from last year did 20:50 so I was happy with my effort. I ended up 14th overall and 1st old guy. The placing didn't really matter to me what mattered to me was the fun. It was a total blast to go that hard. Other than the first 1.5 miles my HR and breathing rate were at max. Total Fun!

Two days later and my shoulders are still worked from all of the obsticals. I can't wait to do it again.

Mary had a blast too. She was all smiles at the finish. We had a great time.

Posted by David Jewell at 12:01 PM No comments: