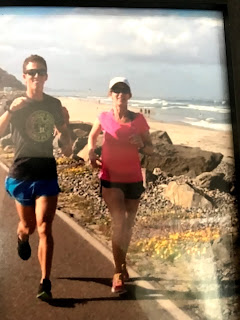 The lengthy debate revolving the shoes Kipchoge ran in last weekend set me back. There were calls to ban the Vapor Fly Next %, to strip the medals off the podium finishers in the 2016 Olympic marathon who wore prototype Vapor Flys and then there was Ryan Hall the gifted America runner who weighed in on the subject. The shoes Kipchoge wore to break 2 hours in a marathon were “What If” shoes. The entire event was staged to see if a runner good actually break a barrier. There were no rules except one. He had to cover 26.2 miles or 42 Kilometers. 2 years ago he came close. This year he did it. That’s the only story we need to know. A human being can run under 2 hours for the marathon. There is no point of staging another event like this. It’s done and we can move on. Now we sit and watch as the actual world record starts to creep down towards that barrier. It will do that and it will be rather quick.

Running Is Beautiful
Kipchoge said he thought running could help make the world beautiful. I want to just turn it around and say running is beautiful. I have two stories from the weekend.

Saturday - I really didn’t want to run. I was tired, my knee hurt and mentally I simply was not prepared to run. I went to one of my usual parking spots for running and decided to just give it a try. The first 20 minutes sucked. Nothing felt good and I was simply bored. Just then I crested a hill and there was the sunrise. It hit me, and woke me up. The run started to feel effortless. By 30 minutes I was floating over the trail. The trails were quite, the birds were singing and the sun felt warm. That run took me 90 minutes to complete. I could have easily added on to the run, it felt that good. Running just the process of getting out the door can change a dark mood into a bright mood. It can turn a dark day into a bright day. It’s a beautifully thing.

Sunday - It was time for my wife to run. Her last long run (2 hours) before her 50K next weekend. My wife hates snakes. It’s a true phobia. She won’t touch dirt if she doesn’t have to. Two weekends ago on her Saturday run she tripped on some cable that had been left in the street by some construction workers. Down she went landing on her right knee. Local Life Guards cleaned he wound and drove her home. She was crushed. All week she was on the stair climber and bike just trying to maintain some fitness. She felt ok to run on a treadmill on Friday and Saturday but she was determined to get outside for 2 hours on Sunday. She thought running on trails would be good but there’s that snake thing. I told her I would lead her though the trails on my mountain bike. She did the run and came home very excited. She could feel her knee but it didn’t hurt. She’s now confident again that she’ll finish her 50K. Running is beautiful!

Running To Make the World Beautiful 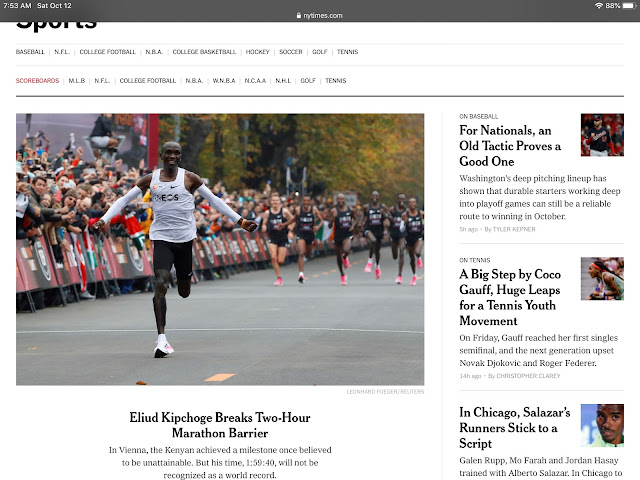 This was the the weekend to be a runner.

Eilud Kipchoge just after running an astonishing 1:59:40 he said “We can make this world beautiful by running”

It’s impossible to know what’s going through his mind when he says something like that. There is so much in this world that is ugly right now but let’s just leave it to the running world for a moment. Alberto Salazar stole the headlines last week and like I said it’s not over. More on that in a moment. But maybe Kipchoge is simply saying let’s take over the headlines with beautiful running. Listening to him for years now I’m quite confident he is actually talking about the World and not the running world. I love that about this man.

2:14:04
Brigid Kosgei smashed the World Record for the marathon yesterday in Chicago. She’s was clearly the favorite going into the race and there was lots of talk of her running fast. The story goes that she negotiated with her pacers a 2:17 marathon pace. At the start line she was feeling good and requested 2:16 pace. In the early miles she kept telling the pacers to pick it up and eventually she did what she did, smashed the world record set 16 years ago by Paula Radcliff. 2:14:04. Was she inspired by Kipchoge?

Salazar
Also in Chicago there were three runners with deep ties to Alberto Salazar. Just as an aside I’ve met and talked to all three. Mo Farah the 2 time Olympic Champion, Galen Rupp, the best American Marathoner and Jordan Hasay one of the best women marathoners from the USA. All three were either presently being coached or previously coached by Salazar. All three took a borage of questions from the media about their time with Salazar. All three had terrible races. Jordan dropped out early. Galen dropped out at 23 miles. Mo finished but just under 2:09. The winner of the race went 2:05:xx and he had to sprint to win so Mo wasn’t a factor in the race at all. Mo won Chicago last year.

Ironman World Championships
You ride for show and run for dough. It’s not that easy of course because the ride is in hot and windy conditions and then the run is simply unfathomable. This year however it was the run that made the race. The highlights;

Running Shoes
The overriding subject about this weekend is running shoes. Are the shoes too much of an advantage?

There are many calling for the shoes to be banned but there is no chance that will happen. The shoes are too important to the general runner. I see those shoes worn by 5 hour marathoners. As they say, “that cat has left the building”. The Vapor Fly Next % and all the shoes from the other brands that are either in the market or about to be in the market are here to stay. It’s a great day in running shoes!

Posted by David Jewell at 3:19 AM No comments:

My Intersection with Alberto Salazar 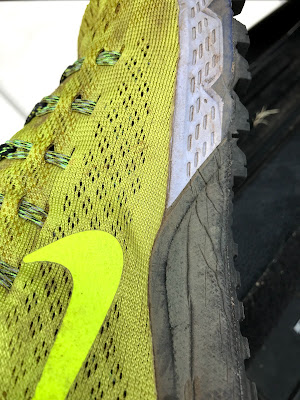 As most of you know I spent 12 years working at Road Runner Sports. During that time I was afforded the opportunity to build good relationships with many in the running and running shoe world. One of those relationships was with a running hero of mine, Alberto Salazar. The first time I met him he came to RRS for a Nike event with our very large sales staff. I was asked to give him a tour of our facility which was one of my favorite things to do. He was a regular customer of ours and it was fun to show him where his packages were put together. He bought some training/recovery things from us that Nike didn’t make or that he couldn’t buy in Portland.

Not long after that we took a trip to Portland to visit the Nike Campus. It was his time to give us a tour. We spent the day with Nike product team and either before or after dinner we drove out to the Altitude house. By this time Alberto was starting to have some success coaching runners. Through was is today the NOP (Nike Oregon Project) he bought a house. He had each bedroom in the house set a different altitudes. He prescribed for his athletes which altitude they should be sleeping in. The idea was the well known method of sleep high, train low. An athlete slept anywhere from 5,000 feet elevation to 10,000 feet elevation. These were not altitude tents these were completely sealed rooms.

As we walked into the kitchen we saw a runner running on a treadmill that was submerged in the pool in the back yard. Alberto walked us out and introduced us to Galen Rupp who was I believe a Junior in High School at the time. Galen was dealing with an injury and was just coming back to running. The treadmill in the pool took the pounding away. Galen was running 12 miles that night. After his run we spent a good while talking to Galen in the kitchen.

These three stories tell us quite a bit of what we are hearing today. The purchases from RRS were for his athletes to help them recover from the training. The altitude house was created because the competition was living in Eldoret, Kenya situated at 5,000 feet above sea level. The treadmill in the pool was the precursor to the treadmills today that suspend you so that maybe you are running with only 50% of your body weight at foot impact. Alberto from day 1 was constantly looking for that edge that let his runners recover better so they could push harder during training. It’s fairly simple to understand.

There is a story from today where one of the doping agencies is quoted saying “no coach in our history has ever called us so much to make sure he was doing things legally”. That very fine edge of just being on the right side of the doping line. At some point during all of this according to the recent ban, Albert crossed the line and went from the right side to the wrong side. It’s a really sad tale for the sport of running. It’s a story we’ve seen too much. Some success breeds the need for more success. The IAAF (Track and Field) and the UCI (Cycling)  are full of these stories.

This is not over. The fall out of this one event this past week will go on for years. Mo Farah and Galen Rupp went 1-2 in the Olympic 10,000 in London. They were training partners working with Alberto. This week at the World Championships Sifan Hassan set the track on fire. On day one she won the 10,000 covering the last 1500 meters in under 4 minutes. To put that into perspective only 9 women this year had run the 1500 in under 4 minutes. Then this past Saturday after two qualifying rounds of the 1500 Hassan pulled 8 runners under 4 minutes. She won the 1500 in an astonishing 3:51.95. The 10,000/1500 double is unthinkable. The two races are completely different disciplines and then there are the qualifying rounds of the 1500 to deal with. That’s 4 races in less than a week. On the surface we should celebrate the greatness but Hassan is part of the NOP. There is a forever could over her double this week.

This is just another reason to respect performance but not worship. I met my running hero only to be disappointed. I once road bikes and had dinner with Lance. At the time he was a brash, gifted athlete on his first continental cycling team. He was just a guy. Many in the world hero worshiped him and look how that ended.

Big Weekend
I wrote my wife’s training program on a single sheet of paper. She signed up for the Marine Corps 50K which takes place at the end of October as part of the Marine Corps Marathon. In August she burned her foot really badly while she was off volunteering in Lebanon. She had to take a great deal of time off running. Her only request was to have at least one run that was 4 hours. She wanted the confidence. I built her plan to load up running on the weekends. Last weekend she had a 1 hour run on Friday, a 1 1/2 hour run on Saturday and 4 Hours on Sunday. She killed it. She ran 22 miles on Sunday in that 4 hours. She’s still nervous about making the cut off. Oh the coach-athlete relationship.

Posted by David Jewell at 7:04 AM No comments: