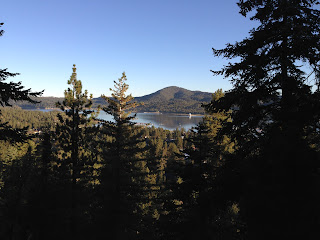 I've always enjoyed Big Bear Lake, CA. Some of my best triathlons from a performance standpoint occurred in that area. It's where I learned how to ski. It's also where our sone did cross country camps with his club team leading into the season. So when a couple friends said they were running a 50K there I asked to tag along.

We were only there from late Friday afternoon to early Saturday afternoon. My friends were up early to catch a shuttle to the start of their race. I went with them and started my run from the finish line of the events for the weekend. At the time 6:30am two 100 mile finishers had come in.

My plan was to have some coffee and a little to eat before my run. I walked down to the coffee shop and they were closed. It would be 30 minutes before they opened. I was dressed to run. In other words I had shorts and a shirt on. It was in the mid 50's and I didn't feel like hanging out for 30 minutes. I decided to run on an empty stomach. 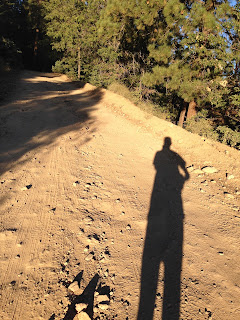 The sunrise was both beatiful and warm. It was actually quite easy to warm up because the run started with 3 miles of climiing to Skyline road. It wasn't so steep I couldn't run, but it was plenty steep. Once at the top it leveled off for a bit and then went up some more. It tops out at 7,940 feet above sea level. 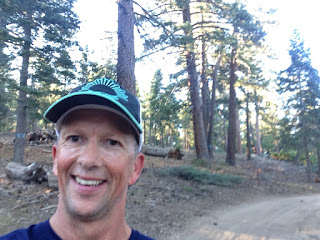 About 3/4 of the way up the first climb the 3rd place 100 mile runner came by with his pacer. His pacer asked "Is this the way?". I can only imagine what it feels like at 97 miles into the race. The course markings parobaly seem slight. Especially if you happen to miss one of the markings. I assured them they were on the right path. Funny story the guy that won the race went off course and ran 6 extra miles. That's kind of insane. 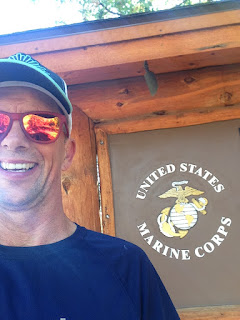 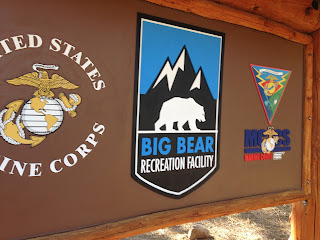 It's always fun to come up on things unexpected. I did not expect to find a USMC recreation center on my route. It's a place where Marine families can come to camp, ride mountain bikes, hike and simply enjoy the fresh high mountain air of Big Bear Lake.

My friends cut there run short. I was walking to the finish line long after my run. I thought I would have at least an hour to sit and watch the ultra runners finishing. I was almost to the turn to the finish line when my friends pulled up to pick me up. They cut the course short because they were mentally out of it. We went back to the condo, they showered and we had a great lunch.


Posted by David Jewell at 1:33 PM No comments:

High Intensity on the Bike 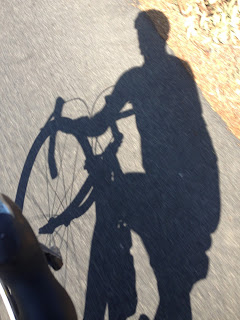 Today I went out on the bike during the eclipse to do some high intensity work. We have a great flat section of road in Fairbanks Ranch to perform the work. The overall ride was 2 hours and the workout looked like this:

I was absolutely cooked by the last one. I hit 174 on my heart rate on one of the efforts and 170 on all the rest.

As I was riding home I was trashed and zoning out. My mind was on other things. A cyclist came by me on one of the hills like I was standing still. It snapped me out of my thoughts and over the next mile I kind of chased him. I caught him and we started to chat. His workouts made mine seem casual.
He's training for the masters track worlds.

Friday he did motor pacing on the track at 45 miles per hour. Each time for 500 meters.
Today he was riding 85 miles at 18 miles/hour.
Tomorrow he's back on the track. From a standing start he gets up to speed. The moto comes by and then sits in. He chases it for 500 meters. They repeat this often. He's 53 years old.

Email ThisBlogThis!Share to TwitterShare to FacebookShare to Pinterest
Labels: Fit Past 50, The Life Style

You may be asking yourself "Why is Dave posting political comments on Social Media lately?"

There are two reasons really:

Posted by David Jewell at 2:36 PM No comments: 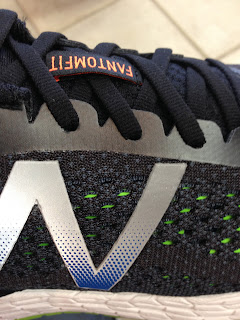 A couple posts ago I mentioned I was working on a new project. Actually over the past two weeks it's been two projects. On the market research front I'm building a database for all the work I've done and am going to do. With Berlin, Chicago, Kona and NYC still to come this year there is lots of research to do. But more to the point of this post. Over the last 20 or so years I have been helping runners solve problems. Many people have asked me to get into coaching. I've never really considered myself a coach but more problem solver.

A couple years ago Pete from Champion Factory contacted me and said he was going to send me his athletes who had running problems. Over that time I"ve developed a system from all the experience I have with athletes that seems to be working. Most of the athletes I have worked with call me the whisperer. I believe it comes from my listening skills. I simply ask a bunch of questions and then listen to the athlete as they answer. The entire time we are also running so I'm watching and listening to their form.

The bottom line I've come to is Running Sucks. It sucks until it doesn't and when it sucks it's dreadful and when it doesn't it's peaceful. My entire goal with my new project is peaceful running.

If you are interested in that side of my world visit FreeRunSpeed. For more rambling here about Life, Running, Triathlon, the US Marines and all the fun places my wife and I get to go keep coming back here.

Posted by David Jewell at 11:35 AM No comments: