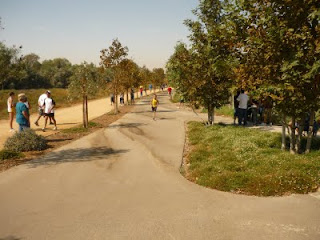 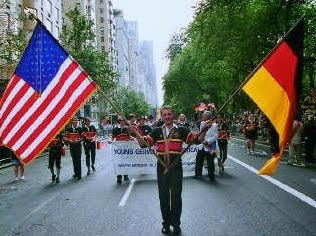 Marco started running Cross Country. It was his choice, he seems to like it and he ran his first race yesterday. The dude has run over 100 miles since the start. Not my accomplishment but introducing him to something new was one of the goals.

We moved from Germany.

Mary is back at work kicking Ass and changing lives. It's hot in the classroom she's got 156 students and she's loving it.

If my mind starts to go as I age (no comments please just yet) please let me know. I want to be aware of it. I love my mother but dealing with her life is frustrating. She is beyond the point where she can really know what's happening to her but not so far beyond to stop us from doing anything about it. It's a pure waiting game and it sucks. Sucks mostly for my big sister Cyndi who has to deal with it every day. Mom, I love you. Please understand that we are trying to give you the best life possible.

Did I say we moved from Germany.

We took a sizeable hit in the financing world. Moving from Germany did not help matters. 2010 will absolutely have something to do with our finances.

Win my agegroup. To do that you have to race. With all the stuff, moving, new job, moving etc, racing has not been a priority. We'll see though, 2009 is not over. The Journey to getting back to racing shape has been the big pay off. I'm 10lbs lighter, and I'm much faster. I can feel it every day.

Man, we moved from Germany. That was an effort.

Dave
Posted by David Jewell at 5:13 AM No comments:

Yes, that says 2010. Way off in the distance for most of you but nearly way in the past for me. When you work on the manufacturing side of things, years begin to meld together. For instance, this week I turned in the project plans for Spring 2011. I can't personally tell you where I'll be in January 2011 but I can tell you where Zoot Running shoes will be. Well not exactly but you get what I'm saying. What I'm leading to is goal time. It's nearly October and it's time to write the goals again. The rest of this week I'm going to look back at 2009 and the Goals I set forth. I'll comment on this on Sunday. Then it's off to 2010 thinking. Of course I'm almost done there so setting goals around 2010 should be easy. Not Eactly!

Try This One on

The workout called for Swim only today. What one workout on a Sunday. That's it? Watch out what you wish for. Here was the swim today.

My Arms are still on the tired side 6 hours later.

A Step Back in Time

Can you go back in time? I think maybe I did that today. I had an appointment at Road Runner Sports. The goal was just to learn about the Zoot business there and then formulate a plan to make it better. I walked into a wall of people I worked with for up to 12 years. Very fun but also a bit overwhelming. It's like we never parted. At the same time I felt a bit out of place. My life at Road Runner Sports seems so long ago. It's only been roughly 3 years but that seems like a lifetime. More time with them will make it all feel normal again.
It's a good life....
Dave
Posted by David Jewell at 7:57 PM No comments:

You can look at a development trip to China two ways. First you can feel the effort of the long flight, long days, crazy factory dinners. You could feel the effort of bouncing down the highway in a van with crappy air conditioning. You just feel the traffic rumble all around you. Or you can appreciate what happens on this piece of earth. A people who work their tail off to produce goods for the rest of the world. The majority of all the running shoes in the world are produced in the area. That's not all though. Look around your house, much of what's there was produced in this part of the world. It's just amazing to watch all the trucks roll by and wonder what's in that container. 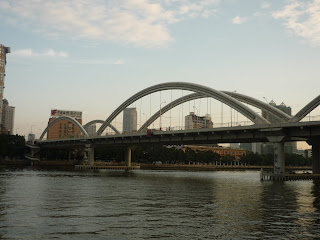 Just a bridge on the river. 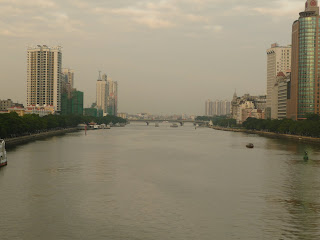 The River in downtown GZ. A great place to run. 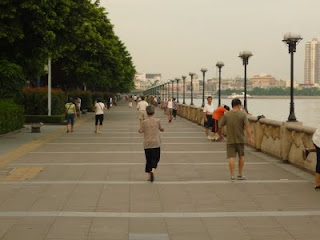 Obviously I wasn't the only one with the idea of getting outside early in the morning. 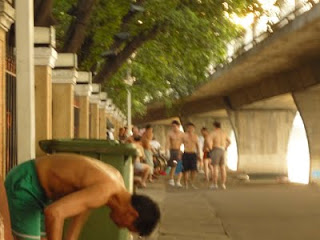 Care for a swim? A group of locals gathers here every morning for a swim in the river. 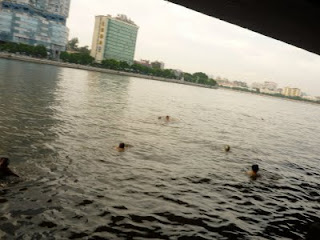 There they are, starting or finishing their swim. Let me tell you many swim as much as 1 mile. 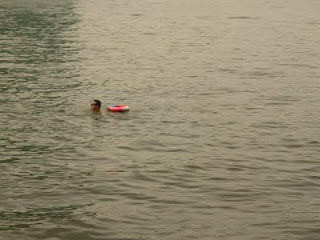 You have to be your own lifeguard out here on the River. 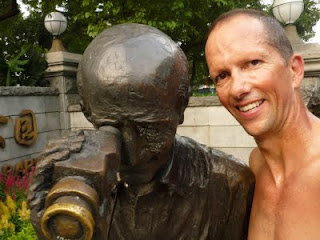 A monument to the visitors.

Posted by David Jewell at 8:37 PM No comments:

Week #1 of the new job is in the books. It's quite a change going from the huge engine, 12 product marketers, 5 designers and 7 developers that make up adidas running on footwear at least, to one product marketer (me), one developer and an outside designer. Although the goal is not people oriented it just prooves that there is work to be done.

The week was rather non-descript. General get to know everyone, sit in a few meetings, watch how things happen. Got the big company orientation and that's when I knew there was a really big engine there. Let me see if I can explain this. Zoot, is part of the global company that is K2 sports. K2 operates a large portfolio of brands including, Ride, Marmont, K2 and in our building Adio. K2 is owned by Jardin. Jardin operates a huge potfolio of brands many of which you have in your kitchen (Mr. Coffee, Crock Pot and many more). So we have the small company/brand that has this absolutely huge engine behind it. You can tell how big a company is by the HR packet you receive on day #1. It's big.

The end of the week, Friday had a bit more juice in it. We started the day with a 6:00am meet up at a San Marcos Starbucks. 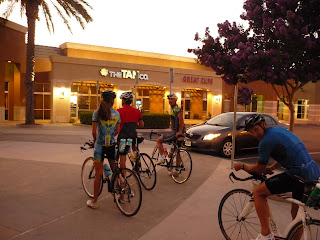 As you can see by the pictures this was going to be a rolling meeting. Really it was simply team building, very little work talk was being done. That guy in Blue is Brian the big boss at Zoot. I'm pretty sure that he'll compete at anything if you let him. It makes for a fun atmosphere.

The Ride for the day was to take us to the top of Palomar Mtn. It's not a walk in the park kind of climb. The climb itself is 11 miles long starting at 2.000 feet and finishing at 5,200 feet. The hard part is not the climb, it's the getting there and then getting home that's hard. Here we are after the first big climb of the day, together again and cruising into the morning sun. 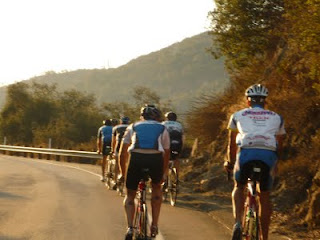 Palomar is a well known mountain in the world of Cycling. Clyclists for years have been doing their training in San Diego and all use Palomar in their preperation. There are unoffical records kept (50 minutes to the top I believe) and lots of stories of pure collapse revolve around this mountain. Here the group gathers at the store which marks the start of the climb. All smiles here. Let the suffering begin. 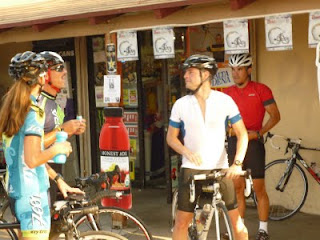 Like I said it's not always the mountain itself that kills you. Everyone rode the mountain at their pace. We gathered at the top and then rode back down the way we came. It took me 80 minutes to climb and 25 minutes to get back to the start store. We gathered at the store once again and then made a route home decision. Fortunately or unfortunately the choice was to follow the tour of California final day route and go up Cole Grade. I believe in general, Cole Grade is the hardest climb in San Diego. You usually hit it after riding Palomar which means it's mid-day. It's steep but not super long. What makes it hard is the absolute lack of wind and the exposure to the sun. On this day it was 96 degrees in the area but on Cole Grade it was well over 100. It's a tempo climb for sure. Go too much out of your comfort tempo range and you could blow up easy. Evidence of blowing up is in the picture below. 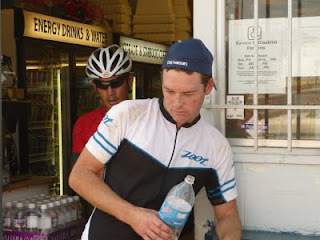 I'm not sure how long the ride took but I know we were out in that sun for 7 hours. Lots of gathering at the stores. It was a hot hard day but a fun one. There will be lots of fun stories to tell around the office for a few weeks anyway.
Week two of the job will be totally different. Off to China to fix shoes with AA. It's a good thing I've got Cardiff to come home to. 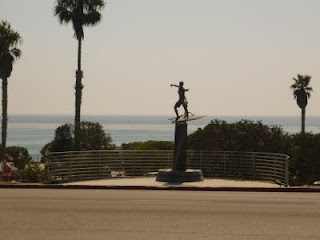 Posted by David Jewell at 5:30 AM No comments: