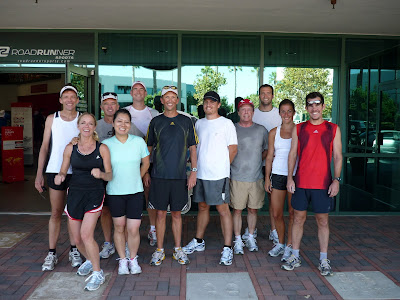 You may recognize your face in this picture. It's a fun picture from Road Runner Sports and the recent world tour of running. This was a good time.
A few months ago my wife Mary asked me to sign her up for the Berlin Marathon. We can do it through work (why not, we sponsor the darn thing). I was out of town, Panama of course, when the entry went live on our intranet. So I emailed Sasha in the BU and asked him to sign my wife up. I gave him my employee number and all the right information. He emailed back confirming that he had done it. Well weeks later emails starting coming my way about the Berlin preperations. I would just forward them to Mary. One day though I noticed I received two of the same email. I opened one up and to my surprise my name was listed as an entrant. No, there must be an error. I walked down to talk to Sasha asked "Sasha, by chance did you sign me up too?" "But of course Dave, how could you ask your wife run and you not run."
Well gosh darn it, I didn't really want to run a marathon this year. In fact unless it's at the end of 112 miles of cycling I don't really want to run a marathon. But a marathon I am going to run. So the next thought was Train for it or run it. I in my sound mind and sound body (thanks Asics) I decided to just run it. Why train for something I wasn't planning on? But I'm no dope and for those of you I have occassionaly given running advice to I can't possibly in good faith jump into an event unprepared to at least run the distance. So with that I've chosen simply to run at every opportunity I have which at this point is every day. In a normal week or month I might run to or from work once. I've done it twice this week. Yesterday was with a guy in the BU that has run under 2:30 for a marathon many times. We talked the entire way. He kept looking at me with the "Are you o.k.?" look. I was laboring. Today, thanks to Trigger Point and sleep I ran again. My goal is essentially to run every day until I break down or the race comes along. Throw in a couple long runs and then bank experience. This is what I'll tell you, running a marathon hurts me worse than doing an Ironman. There is probably a preperation thing but a 3:20 marathon off the bike is so much easier than a 3:00 hour plain marathon. That 20 minutes is huge and I like the warm-up.
Back to the post title. Yesterday after my running buddy peeled off to his house, I slowed to a crawl. I told myself right then and there, "I hate running". But today I ran 45 minutes at my pace with big hills and sunshine and I had a great run. So what's to hate about that?
It's a good life.....
Dave
Posted by David Jewell at 11:34 AM No comments:

I was reminded recently of how Neptune our favored Black Lab left this world. He knew he was dying. He was a dog and they know when it's their time. He told us it was his time. The day we took him to the vet to end his life was one of the happiest days he had in a long time. He walked from the car to the vet office wagging his tail. He barked at and chased the birds. He had a big chocolate cookie. On the vet table knowing this was it, he gave our son Marco a huge lick across the face. When I looked into his eyes there was a calm to him. Those eyes told me it was a good life.

We should all be able to leave this world wagging our tail.

Dave
Posted by David Jewell at 1:18 PM No comments:

I'm a big believer in Karma, the good kind. Do something good for something and it comes back to you. It works with money, and good attitude. The more you give away, the more you get in return. I know there are some who will think of the money thing as "yeah right" but it's true. There are countless enormously successful people who put all there money in to start a charity and it all came back to them and more. But this post is not about that Karma.

Today my big sister and I did something we should have done a couple years ago. Our mother is diagnosed with mental inllness and 4 years ago the Doctors said she shouldn't be driving. Today we finally got the nerve up to steal her car and her license. It was not an easy thing to do. In fact it was one of the sadder moments of my life. Car travel was part of her life. It was how she got out of the house. We took it away. In the long run it was the right thing to do but Karma will strike back. Somewhere down the road probably when I'm 70 years old Karma will strike. Maybe if I can I'll write about it.
Posted by David Jewell at 1:10 PM No comments: