This year like any year has been filled with Failure. Although my Ironman St George result to many seemed like a success it was a failure to me. I wasn't close to my goals (however stretched they might have been) and worse than that I often failed to even compete. I was so bad my competition was a guy who was worried about making the cut off for the day.

In building running shoes, the failures have been many. The most recent has been heel problems. Notice the pictures below. Those are my feet and those are my heels. This was last week in a pair of top secret new shoes for next year. They are simply the best shoes we've ever made so I'm proud of that. But I'm not proud of that heel. Failure to the highest degree in running shoes. 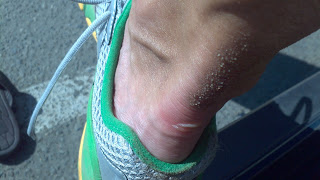 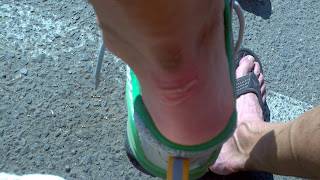 Which leads me to our house. We sent Marco to a camp last year and were really impressed with his attitude coming out. What we learned though was that we need to work with him on the camp values to make them stick. He wanted to go again this year which was great. That mean's this camp that is all about his head was doing something. When he got home from camp Mary had the great idea of ordering all the camp materials. So we did, and received a couple great books, DVD's, posters and the 8 keys. Sunday Marco and I hung the 8 keys and the posters around the house where we would see them regularly. The one below caught my attention today. 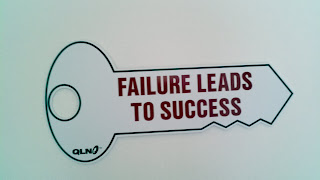 This key is so right. Failure Leads to Success if you let it. If you let failure get you down you will stay down. But if you learn from your failure you will grow. I can tell you that I hope to fail often in the future. I can also tell you that the Zoot heel will be fixed to success and that Ironman racing may not ever truly be a success but I'm willing to give it another shot.

good past dave... and a well timed read for me. keep'em coming!

Thanks. I thought of you when we made those shoes. Notice there's some green in there!

Dave, thanks for writing this post it was very timely for me as well. I know that I learn the most when I fail, but it was great to be reminded of that right now. I can't wait to see what you and the team have come up with for the 2013 shoes. Some day that sucessful ironman will be even more satisfying because you had to work so hard for it.

can i get some green ones for kona!!! haha... good seeing on the coast yesterday.