Leading up to the race this week there was talk of frustration. The boys had been invited to the most prestigious cross country race in the West, Mt SAC. It's a big deal to run this event. Coach decided racing local was better for the team so he entered them in the Jaguar race on a course they know really well. In fact, Marco has raced on this course we'll over 10 times. The frustration lingered into race morning and to be honest I had no idea how the race would play out.

One thing for sure is that the coach knows. The boys were running in the big school race. They are not a big school. This ensures that egos are kept in check. No easy day in cross country.

The Race start for an invite is a bit sketchy. 120 boys aiming for a turn 200 meters away. Somehow though the start was clean with no falls. The team came though 800 meters bunched together sitting just outside the top 15. At the 1 mile mark the #1 runner was 15 or so meters in front the rest of the team but something interesting was taking place. Marco was leading the rest of the team. The first big hill is at the 1.5 mile mark and it's a big separator. Coming off the top of the hill the best runners had established there place. The #1SDA runner came through in 15th or so and right on his tail was Marco leading another team member.

At the 2 mile mark the situation was the same. #1 senior runner and then Marco with in 5 feet. With 6 or so minutes of racing remaining and one monster hill anything can happen. The race blew apart on the second hill. The gaps got wider. The lead runners came in clear of everyone and then the waiting started. Quickly the SDA runner came around the corner and still on his feet was Marco. No way Marco wins this Sprint but the fact remains he was challenging the #1 runner on the team. The boys rushed to the line Marco finishing 16th two places behind #1.

Results:
Team 3rd place. The best result ever at this invite and they beat a team they have never beaten dating back 12 years.
Marco ran a personal best 5k but more importantly was how he did it. He ran strong, with supreme confidence and poise.

One step closer to the goal.

I remember way back to 1997. I was working at Road Runner Sports and was 2 years into a 12 year career there. We were a catalog company watching what was going on with the internet. The Chief Runner - Big Boss at RRS, first claimed that people wouldn't buy on the internet and asked us to create an information page. What we created was one of the first forums widely used. We called it Shoe Talk. You could go on the website find your shoe and talk about it. It was hugely successful especially for a shoe guy like me. It was my source for running shoe information. Finally after a year or so of shoe talk the Chief Runner gave us the green light to open up a shopping cart. People bought and bought and sure enough a business began to take shape. After two years or so of selling, myself and another gentlemen were pulled into the big office. You two have a new task, Leap Frog the website. We are running double monthly growth now go double it again. You Dave go into the market and find the partners, you coworker start looking at the infrastructure to handle the business. We were young and somewhat stupid and so we got to working.

Most of what we did failed. A few things worked. The things that worked caused us to go way above the goal. We did our job and then some. My most memorable meeting happened in an apartment in Downtown La Jolla. I sat at a table and had this guy describe his dream. His dream was written out in grease pencil on his sliding glass door. I loved it so much we started a relationship. But before we really got going a huge number of competitors joined in on his game so I went to meet with each and everyone of them. We actually created one of the first skins on a website where the face of the page was RRS but the back end was a different engine. It was crude on line race registration. Well less than a year after I toured the country meeting all these people they were all in San Diego shaking hands. They had just formed together as one, creating the company known as Active.com

Another such random meeting occurred. This guy came to me with a dream. One day people will use their phones for almost everything. He said we've created this program (now called an App) that allows you to use GPS on your phone to track your running. It automatically load on your log when you hit stop. Eventually you will be running in San Diego and your friend in NYC and you'll be able to run together using this program. You'll see his pace, he'll see yours and you can talk the entire time. Dreamers I tell you. 3 years later I'm at adidas and was asked to work on this thing called Mi Coach. It brought back memories of things I'd already seen and I realized that we, adidas, were actually behind in thinking. I put adidas in touch with the guy with the phone and within a year, adidas bought his company and brought he and his partner to the team to launch Mi Coach.

There is a story here about being a connector. These are just two stories in a an entire host of stories I can tell like this.

The other day I was the door man at a Birthday Party in Kona for Zoot. I was applying the wrist bands that allowed people into the party. I put a wristband on the Grease Pencil guy. Only he knows this story and we always have a little extra firm handshake when we see each other. He's filthy rich because of his deal and I could not be more happy for him.

The best way I can describe this, is this way:

Posted by David Jewell at 8:47 PM No comments:

Email ThisBlogThis!Share to TwitterShare to FacebookShare to Pinterest
Labels: The Life Style, The Work Life

I know that when I live this path my days are awesome. When any one of these things get out of sorts it affects all. Maybe the sport things don't affect everything else but the sport results after forgetting some of this do. Take for example the statement that Strength is everything. As I look back on this year my body is stronger today than this time last year but not as strong as it needs to be. I neglected the specific strength work and it shows in my late race abilities. That race in Tahoe has affected my mind set for weeks.

I am glad I took the time this weekend to look back at this post. It's a reminder to read this every day. Positive affirmations are proven. These are mine. What are yours?

Email ThisBlogThis!Share to TwitterShare to FacebookShare to Pinterest
Labels: The Body, The Life Style, The Work Life

The Week That Was: Kona

Last week the work team traveled to the Big Island of Hawaii for the annual Ironman World Championships. It's a week of paradise, excitement building to race day and of course some back breaking sweat producing long work days. 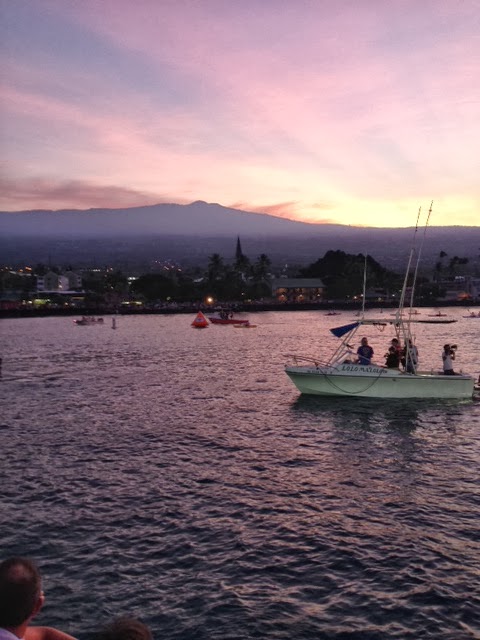 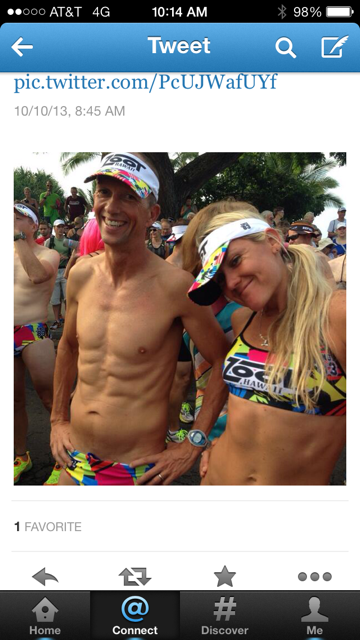 Part of the "Fun" of the week is the annual Under Pants run. It's a charity run to help out the local people. It was first established to make fun of all the triathletes running around in the "Speedo" swim suits. Pictured with me is Bree Wee a local professional triathlete and Zoot athlete. I knew I was in trouble running with her. Being the local girl the cameras were all focused on her. You can follow Bree on her Blog. 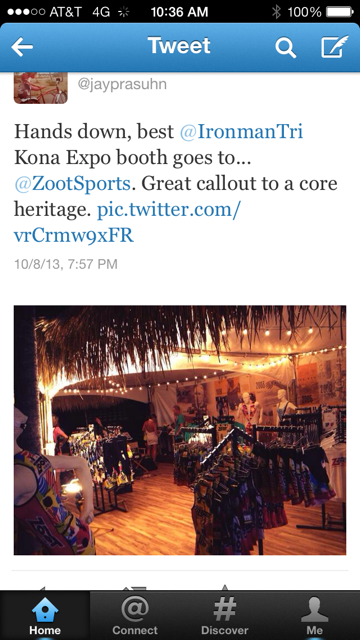 This is wear the sweat comes in. This booth took us 3 days to construct. It by far was the most beautiful booth ever in Kona and as you can see some media folks really liked it too. It was a blast to build and work in this booth. It's great as a brand to make a statement.

Although I love Kona and the Ironman Triathlon it's nice to be home in Cardiff with the family and the routine.

Posted by David Jewell at 6:39 PM No comments:

Last night in a cluster meet (4 schools)  the boys ran a tough race. There is history with other schools, drama on the team and in the end it was all about running a hard race on a hard course. Marco ran strong finishing 12th and first underclassmen. He did the entire race with a blister causing rock in his shoe. Last year he had a couple instances of being pushed around on the track. He made a point to out run those antagonists this time.
Most impressive was the team. Last year in this same race all six varsity runners finished ahead of the first SDA runner. A thorough beating. Yesterday SDA finished with in 2 points of San Pasqual. A complete turn around. Look out world here comes SDA!

This goes out to all the men out there. Tomorrow marks 20 years of marriage for my wife Mary and I. There is no formula to staying married for this long. But maybe the 10 things below will help you in your quest.


These all seem really simple but I believe they work. But more important than all of them I think the key is this: I am totally inspired by my wife. She has taught me more about being a man than anyone anywhere. I can't wait for the next 20 years together.

Posted by David Jewell at 8:06 PM No comments: