It’s a been a rough week trying bring my fitness back up. I took a few days off to get some old man cancer screening done and to rest my aching knee. Looking back I didn’t give my body enough time to recover from the screening. This was the big one where I was given enough sedative to not feel a darn thing. I thought my body was bouncing back fine. My HRV was on the higher end of good and I felt ok. Then Wednesday the HRV crashed and stayed down for 3 days. Did I stop, no I simply slowed it down. Then on Saturday I raced the Balboa 4 Miler cross country race.

The race sucked. I started slow and didn’t really pick it up. Mile 3 took forever or it just seemed to. I essentially jogged in the last mile. I was a full minute slower than last year and finished behind runners I was ahead of last year.

The one thing for sure as you age, your body just does not bounce back like it used to.

What I’m Listening to

Triathlon Taren Podcast - You can find it where you find your podcasts. This week Taren interviewed Pete Jacobs the 2012 Ironman World Champion. That race for Pete was very impressive he went really fast on a hot, windy day. What we didn’t know then but learned later is that Pete was battling chronic fatigue. Turns out the cure he found was a complete Carnivore Diet. He only eats meat, fish, eggs and salt. He’s back to racing and racing well. The interview with Taren it a great listen.

The Science of Sport Podcast - You are looking for the one hosted by Ross Tucker - He’s a brilliant sports scientist and his podcasts don’t answer the questions they simply make you think deeper. So far he’s covered running shoes, Caster Semenya, Riding Clean in Cycling and a few other gems.

What I’m Watching
1. The men’s 800 meter race at the Diamond League Zurich on Thursday night. Not only did Donavan Brazier run fast but he ran brave.

2. The Vuelta Espana - It's a completely different race then the Tour de France. There's less overall pressure on the peloton and because of that and because of the Spanish way of putting on 3 weeks of cycling it's a totally fun race to watch. This year the red jersey (Not yellow) has changed riders and teams on almost every single day. There are four riders favored and close together overall but the way the race is set up it allows for opportunists who simply want that jersey for a day. I watch all my cycling on the NBC sports app. I pay $50 a year and I get most of the cycling in the world. You can also just watch the recap on you tube. Search NBC Sports, Vuelta and you should find the daily updates.

3. UTMB - The Ultra Trail Mont Blanc is the biggest and may be the most important ultra trail race in the world. The champions list is a who's who of the global sport. The main race, 170K (105 miles) was held Friday into Saturday. This event is different in every way compared to a standard ultra trail 100. First off in most ultras you are allowed to use pacers after a certain point in the race. A pacer gives the runner someone to talk to, to feed off and of course to pace off. At UTMB you are on your own. On the flip side at UTMB you run through quaint mountain towns that are packed full of fans. There are points along the way and especially at the finish were the leaders run through Tour de France type crowds. The men's race was won by Pau Capell from Spain. He literally ran away from everyone else at kilometer 1. He lead the entire day. On the women's side American Courtney Dauwalter who dropped out of the Western States 100 after suffering a debilitating injury took the lead midway and never looked back. She finished ahead of all American men but one. She gave a great interview the day after the race:


What I'm Reading - I'm a bit behind in some of my reading. I'm just getting to the Sports Gene by David Epstein. He was on the most recent Science of Sport Podcast talking about his latest book. I thought I should jump on the first one before I read the second.

Finally I leave you with my little gem product for the week. Sports Hydration is simply full of choice and most of it is full of sugar. When I ride or run with hydration other than water I drink Ultima. It's strictly an electrolyte mix, with no sugar. It's relatively cheap too. 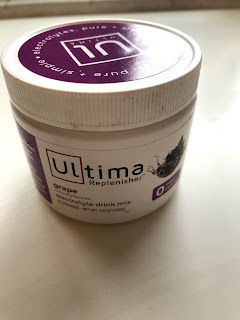 That's it for this week. I'm off to the 5th Ave Mile in NYC next weekend where the queen of the road mile Jenny Simpson will attempt to extend her streak. You can watch the race live on NBC Sunday.