Track and Field plus Saucony Ride 15 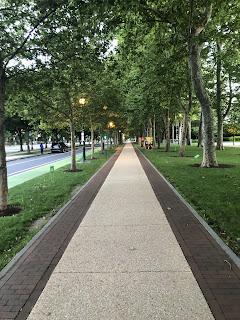 Philadelphia is a nice place to run. The picture above is in the first mile of my run and the run got better from there. I was in Philadelphia for the New Balance Outdoor Nationals track meet. It was my first time in the city and of course my first time at the famed Franklin Field where the Pen Relays are held each year. On my trip I took two pairs of running shoes. The New Balance 1080 which I love and put 500 or more miles in. I use it for my work at the meet and with all the walking I do to get to the meet it was a comfort. I took the Saucony Ride 15 to run in. Saucony has sent me so many shoes it’s crazy. I saw the Ride 15 at the Boston Marathon on a runner. I sent my buddy at Saucony a note on how dynamic it looks coming down the road. He sent me this pair. It feels better than it looks and like I said it looks quite dynamic.
My best judge of a shoe is that I never notice it. On brutally hard surfaces in Philly on tired legs I never once thought about my feet in 16 miles of running on the weekend.
It`s a good life…….
Posted by David Jewell at 9:31 AM