It has been a busy 4 months. Four marathon majors and two half marathons between September 4 and now. The last event was the NYC Marathon. It was a great weekend full of running energy. I met Ken Rideout. Search his name and you will find a guy who runs really fast for his age of over 50. In fact he is the fastest right now. I ran with the Believe in the Run crew and about 300 others for a shake out run. Finally I did my work for 7 hours in The Bronx. In 1998 the first Rock n Roll Marathon was held in San Diego. The selling point was a rock band ever mile. It was a great idea and great selling point. That said there is nothing like the party atmosphere at the NYC Marathon. The city fully embraces the event and instead of tolerating it, the city joins in the celebration. If you want a different NYC experience be there on the first Sunday in November.

On Tuesday Mary and I went to watch a ceremony with a former student of hers. Juan was brought to this country by his parents. Four years after arriving he walked into Mary’s classroom. She saw something in this kid. Although the chips were against him she invested her time in him. He blossomed and became a leader in her classroom. Long story shortened for this, Juan is a member of our family. Not officially of course but he refers to Mary as his White Mom. The ceremony was held on the campus of San Diego State University where Juan attended and graduated with honors. The school opened a resource center for kids like Juan who are part of the DACA (Deferred Action for Childhood Arrivals) program. DACA kids can go to college here in the US but their immigration status is always up to politics. The resources available to them to navigate college life are limited. There were none when Juan went to school so instead of complaining he got to work and organized a support group. That support group turned into this officially recognized resource center. Juan spoke about his dream for the students in attendance. He talked about his success but admitted it was not easy and that he could not have accomplished it without the help of people like Mary. Juan is married, owns a home and became a US citizen earlier this year. Just walk a mile on Juan`s shoes. It is a story of persistence, love and grace.

Shoe of the Week 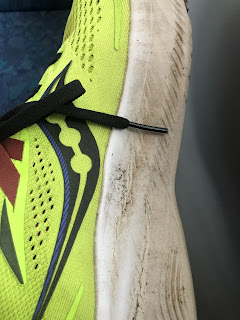 I am behind in my shoe updates. In May of this year Saucony sent me the Ride 15. I had scene a couple pairs in the Boston Marathon and was impressed with the visual update. The shoe feels better than it looks. I put a great deal of running in this shoe in May and June then I set it aside for other shoes. When I nearly broke my ankle in July I knew it would take a special shoe to allow me to run. When the swelling went down and I could run again I reached for this reliable trainer. It did not fail me. My foot and ankle felt great running in this shoe.

Why? It a dynamically designed one piece midsole. It delivers mild support and a great deal of soft feel under foot. There are shoes you where because they make you feel fast or they over protect you from the road. Then there are shoes that feel like home. The Ride 15 is just one of those shoes that feels like home. I felt so good about the shoe I bought a pair for our son. He half joked that I sent him a Saucony Ride. Then he started running in it and felt what I felt. He is 30lbs of chiseled steel heavier than I am and is hard on his running shoes. The shoe stood up to his sub 6 minute/mile pace mile after mile after mile.

Email ThisBlogThis!Share to TwitterShare to FacebookShare to Pinterest
Labels: Running Shoes, The Runner